Well its been some time since I did a blog post and I figure its just darn lazy of me not to do an update so here it is.

A lot has happened since my last post. I moved back to Adelaide in December last year to take up a new work position and I spent many hours painting my backside off to get ready in time for the great Waterloo 200th anniversary mega game at the Hall of Heroes in Campbelltown, NSW. My plan was to drive my troop carrier with my mate and fellow gaming enthusiast Barry Von Clickenhoff loaded with figures the entire 14 hours to Sydney from Adelaide. Sadly Barry's health took a turn for the worse and I had to do the trip solo. In retrospect it was worth the long drive as not only did I get to catch up with some old mates and make some new ones, I got to participate in what had to be the biggest wargaming event I have participated in thus far. The terrain, stretching over huge 5 tables and the thousands of well painted figures representing every unit that participated in the battle was a spectacle to behold. 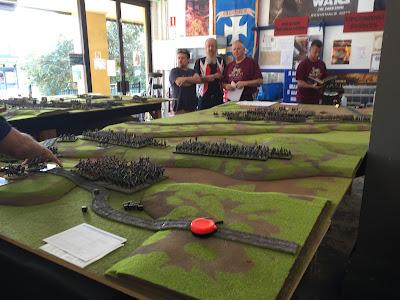 Just one of the five tables being set up. This would probably end up being the most hotly contested table representing the area between Hougoumont and La Haye Sainte. In the background can be seen Craig, Bryan, Terry (master craftsman of all the terrain) and James. 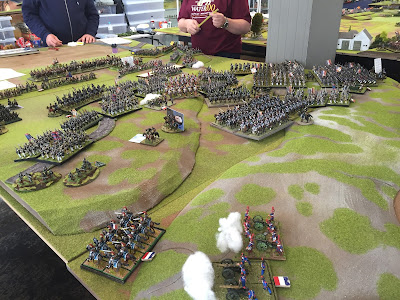 The same table later on the first day. The massive French assault was spearheaded here to try and break the Allied line. 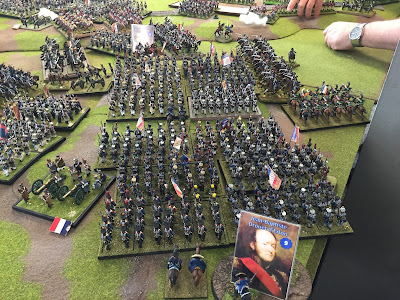 I had the honour of playing d'Erlon and had managed to swing my Corps to the left of La Haye Sainte to support the French assault. Nothing pretty here. It was a bloody slog fest with both sides throwing their valuable reserves and Guard in to try and gain an advantage. 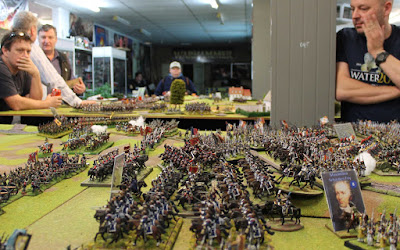 A rare pic of myself, on the left, pondering what to do about the bloody deadlock that developed. With resolute Allied Infantry to my front and Allied light cavalry harrying my flanks there was nothing to to do but bash on up the guts with bags of pas de charge. I could hear the sound of Prussian guns three tables to my right. 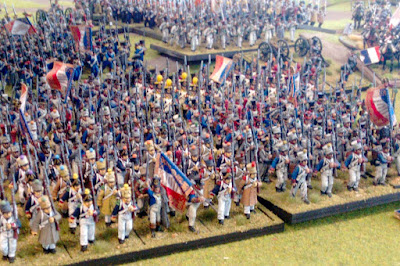 An Allied view of my Corps as it pushed on. I know it gave them a great deal of angst.

All said and done after two days of gaming I was exhausted. The effort put in by all concerned was fantastic! The end result was that there was no clear outcome. Another few turns and I am sure we could have broken the Allied line but instead of heading for Brussels we would have had to turn and deal with the Prussians. *Photo credits to Sparker
Posted by Unknown at 07:15 2 comments:

Well I have been making the most of the days off before returning to work. As part of my commitment to the Waterloo 2015 Mega Game to be played at the Hall of Heroes, Campbelltown, NSW, I sort of got lumbered with painting up the Prussian 4th Hussars. When I say say lumbered it was partly my fault. A mate of mine, an alleged gentleman of the artillery, offered to do the 2nd Brigade of the 1st Prussian Corps Cavalry so I could paint up the 1st Brigade. This Brigade included the Prussian 4th Hussars. It was sold to me on the premise that I like painting pretty colourful units and Hussars are always colourful aren't they? Of course after doing some research I find that their uniform was actually terrible. Not only is it a terrible shade of brown for the pelisse and dolman but its trimmed in yellow. God forbid Hawthorn colours! Anyway I did my best and here is the result. Thankfully come the big weekend in 2015 I will be on the French side. 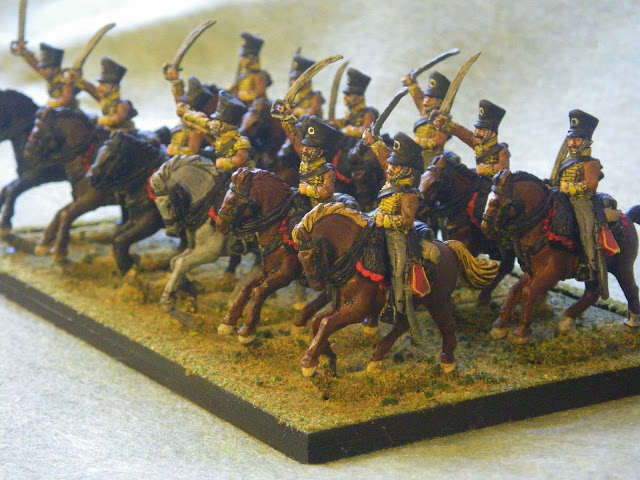 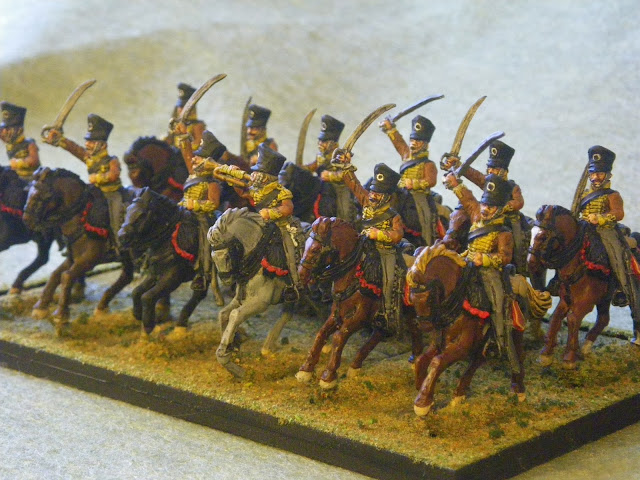 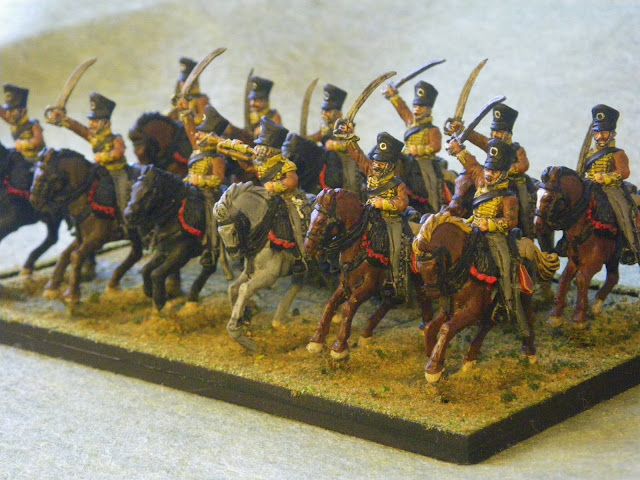 Well I have been a tad busy over Xmas putting together new units and getting some paint on others. I finally managed to finish my Austrian 1st Uhlans and even though they are Foundry figures I think they have come up spendidly. I have also managed to get a start on some of my commitments for the Waterloo 2015 project and get some Prussian artillery started and made a token effort on starting the Prussian 4th Hussars. Dreadful colours but more on that later. 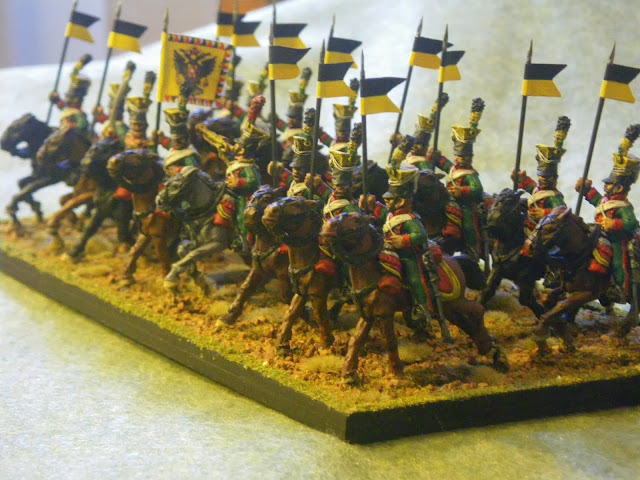 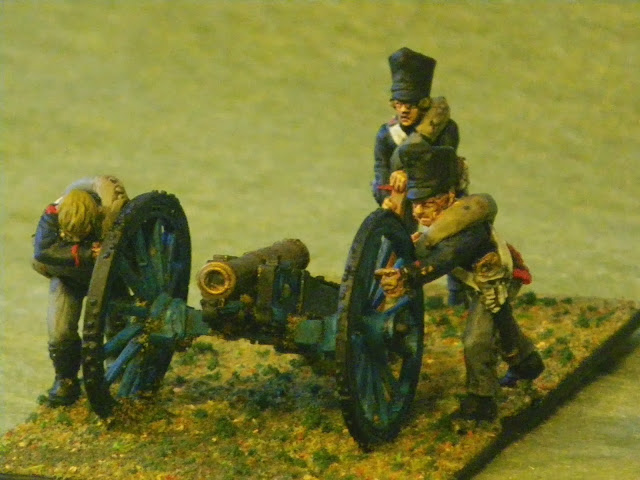 Prussian 6 Pdr Artillery piece being run up.
Posted by Unknown at 21:47 1 comment:

I have been procrastinating with these guys for a while. I hurried to get them painted for a game with those intrepid gents at the Hall of Heroes, Ralph and Philip and only got 12 done in time. Since then they have been on the back burner. Today I pulled my finger out and finished the final 4 figures. I love the Parrot Green pelisses on these guys. 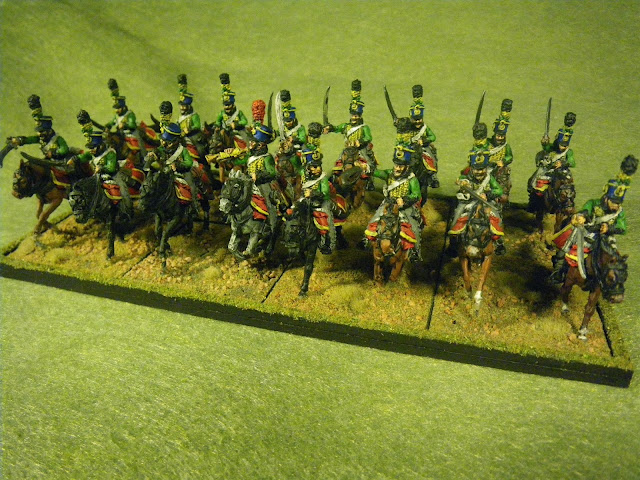 This is my latest offering fresh off the production line. IR 47 Graf Finsky.
These are Victrix plastic figures. To my mind the Austrians are the best of their plastic Napoleonics range. They seemed to have learnt from their past mistakes with their British and French.
I love the varietyof poses and the characterisation on the faces. 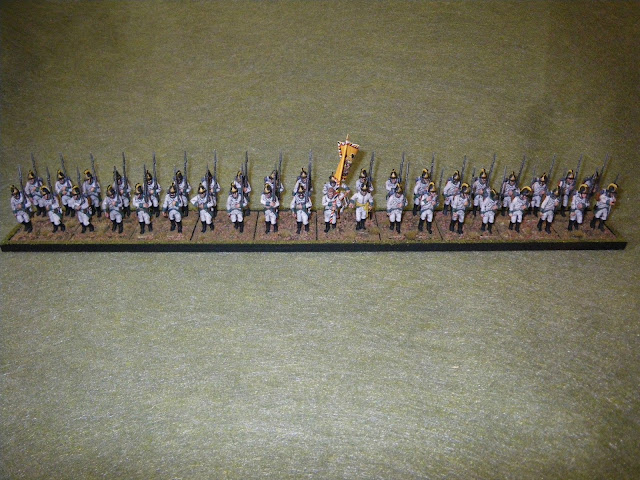 This is a Battalion I did a few months ago. IR 62 Franc Jellacic. These are lovely Perry metal figures. I love these guys. Their figures are always beautifully sculpted and the detail is crisp. 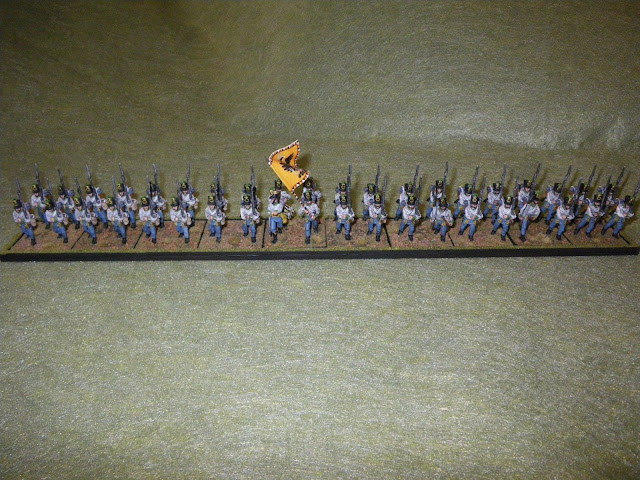 Well this is my first attempt at a blog. As such you will have to excuse my lack of technical ability.
So why a blog? Basically its a place to post photos of my figures and my wargaming activities for perusal by my friends and miniature gaming bretheren.

My main historical and wargaming interests are Napoleonic. In fact you could say I am a Napoleonic tragic. I am also a confirmed Bonapartist. Having had a Grandfather who was a Austro Hungarian Hussar during WW1 I also have a soft spot for the Hapsburgs. Lets face it they got stuck into Napoleon more than anyone else in the wars.

Hopefully I will be able to start putting up pics of my latest additions very soon.